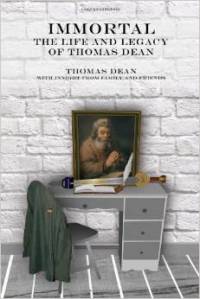 Immortal is the collection of writings by Thomas Dean put together by his family following his death in 2013. Part of the proceeds from the book are donated to the Thomas Dean Memorial Fund, which was set up after Thomas Dean’s passing to help young people fulfill their college aspirations.

The book starts with the powerful, titular poem Immortal and is followed by several poems, essays, short stories and insight from family and friends.

Thomas Dean’s writing in Immortal contains several themes, but religion and loss are prominent. Pieces like Dead as What Made Us, Exodos Story and Jewish Literature are examples of this. Some of his best writing extends beyond those themes, such as in April and Thoughtsonwordswordsonthoughts – which are about love and connection – but not all of Dean’s writing is well executed as many pieces are ambiguous in a way that I thought showed the writer’s writing was still developing. Dean’s essays cover many topics and give the best insight into his mind, whilst the exceptional stories Patriot’s Shame and Insurgency demonstrate his storytelling skills.

By reading Immortal it’s clear that Dean had the ability to please readers, but several pieces, I felt, were unfocused and should have been left out. I thought a better heading style and choice of font should have been used, as well as some tighter editing in places, but this wasn’t so bad that it ruined my reading experience. The insight provided by family and friends is successful in giving the reader an idea of Dean’s demeanor, but some go beyond the author, such as the introduction – much of which is spent expressing anger towards Dean’s father. After finishing Immortal I thought it would have been more effective to have had Dean’s father write his own experiences with his son to prevent the reader from potentially feeling that parts of the introduction, and final insight, were there to vent on a long-standing family issue, rather than provide a deeper look into the author’s life.

Overall, Immortal is a touching piece of work and a reminder of the wonderful moments of life that can be captured in writing. Thomas Dean’s family and friends deserve credit and praise for putting together something that contains his life and legacy.

Have you read Immortal: The Life and Legacy of Thomas Dean? What did you think of it? Let us know in the comments