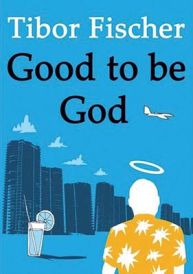 There aren’t many books about a middle-aged man doused in bad luck who decides to move to Los Angeles in search of a new life as a pastor, but this is the story in Tibor Fischer’s Good to be God.

Protagonist, Tyndale – along with his embarrassing medical condition – embarks on a quest to find meaning in his life and finally achieve something. During his journey he meets several other quirky, hilarious and bizarre characters. Fischer does well to make them all grounded but at the same time unrealistic while creating an environment for Tyndale to seem completely normal in despite him being just as strange.

The interaction between characters is captured perfectly, and it makes for a smooth read that’s full of humour. In particular, Fischer’s storytelling ability shines in the situation where Tyndale uses his hired muscle to ruin the reputation of a preacher that attempts to steal his church. Good to be God isn’t beautifully written, but flowery writing would have only hindered the appeal of this book and dulled the shine of its intelligent aphorisms.

Good to be God is entertaining, thought provoking and up there with one of the funniest books I’ve read.

Have you read Good to be God? What did you think of it? Let us know in the comments